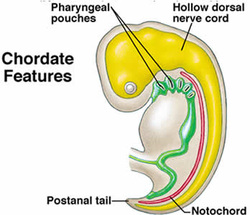 California condors are members of the phylum Chordata. The word "Chordata" means "having a cord," or "with a cord," describing the supportive, rod-like structure called a notochord that every chordate has at some point in their development. This phylum is probably the best-known, as it contains the vertebrates (subphylum Vertebrata). However, a few invertebrates are classified as chordates, such as lancelets, (subphylum Cephalochordata) and tunicates (subphylum Tunicata).

The defining feature of phylum Chordata is the presence of an internal, supportive notochord at some point in the animal's development. Chordates also show bilateral symmetry, a bony or cartilaginous skeleton, body segmentation, a well-developed coelom (body cavity), a complete digestive system (meaning they have both a mouth and an anus), a ventral heart with a closed circulatory system, and a post-anal tail at some point in their development.

As California condors are classified under the subphylum Vertebrata, they move by muscles attatched to an endoskeleton, replace their notochord with a spinal column, have a ventral heart, have a two-way digestive system with large digestive glands such as the liver and pancreas, are divided into two sexes, and have a body plan including a head, trunk, two pairs of appendages, and a tail extending past the anus.