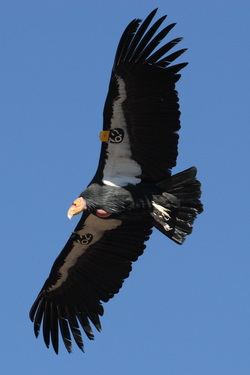 California condors are soaring birds, and thus flying is their greatest means of
locomotion. Their impressively long wings allow them to soar on average 50 miles
per day. Condors will also simply use their legs to walk. Using wings and
feet together allows the condor to climb.

When taking flight, they crouch and then leap into the air, turning over 15 consecutive circles as they gain altitude via thermals, and soar at a typical speed of 30 miles per hour. Condors have a remarkably stable flight, and can glide for about an hour without flapping their wings. On the ground, California condors have a rather slouching stance. However, they are capable of jumping vertically up or down, though wing flapping is used during the ascent of a steep slope.