The California condor is a relatively ancient species. It evolved somewhere around the late Pleistocene era (about 40,000 years ago). During this time, condors were found in various places throughout the North American continent, including the current states of California, Oregon, Nevada, Arizona, New Mexico, Texas, Florida, and even New York and Maine. They also lived as far south as Baja California and as far north as British Columbia.   By the 1800's California condors' great prehistoric distribution had shrunk to the Pacific coast, although still ranging from northern Baja California to British Columbia. In the 1900's, however,
the California condor's population and habitat both took a hard hit. Eventually, they could only be found in southern-central California (mainly around Los Padres National Forest). In 1950, there were over 150 condors; in 1968, 50 to 69; in 1978, 25 to 35; in 1982, 22, and in 1985, only 9 were left. The last wild California condor was captured in 1987.
The scientific name for the California condor comes from the Greek language--gymnast, meaning 'naked,' (referring to their featherless heads),  and gyps, meaning 'vulture'. The common name, condor, was the name the Incas gave to the Andean condor, a species similar to California condors.

Below: Unfortunately I was unable to find a cladogram for the California condor, or one for the modern members of the class Aves. However, this is a cladogram depicting the relations of modern birds to their early, Mesozoic ancestors. 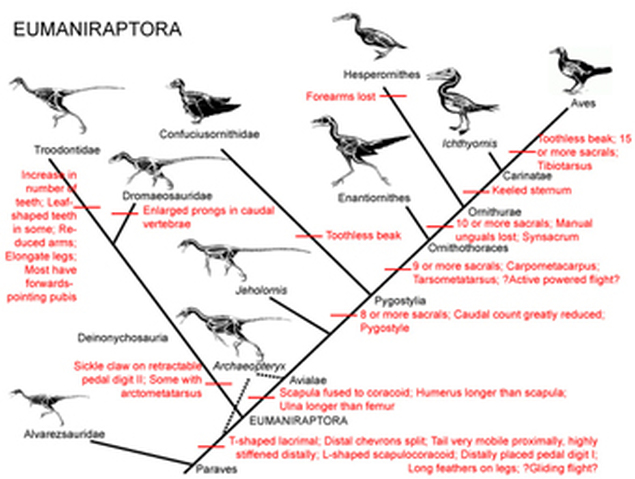