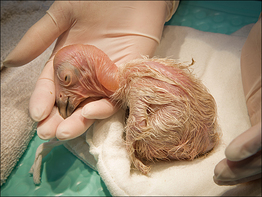 California condors are critically endangered, and have been on the endangered speicies list since 1971. A number of things have contributed to their status, including hunting/poaching, poisoning (from lead bullets left in carcasses, and carcasses laced with cyanide and strychnine left by ranchers to kill wolves and coyotes), powerlines, and collecting for museum specimens. Of these factors, lead poisoning remains the greatest threat to condors living in the wild.
Fortunately, several organizations are working to bring California condors back from the brink of extinction, three of them being the Oregon Zoo, the San Diego Zoo, and The Peregrine Fund.